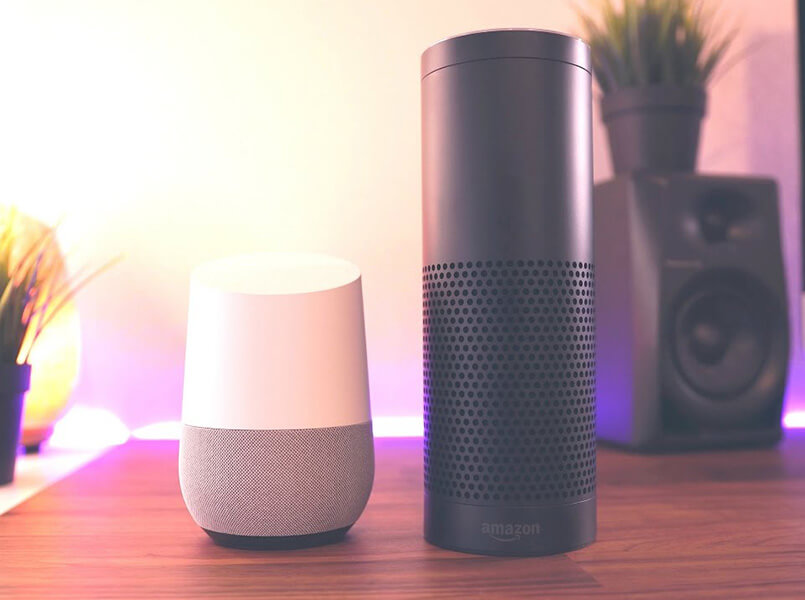 There were those simply, good old days when inhuman voices used to appear only in horror movies or out-of-the-world science fictions. But, present day and age, now it has become common to hear our PC talking back to us. Courtesy of the technology around us, we know people who chat up AI helpers when they are bored.

In such a set-up, it is hardly news that the top AI helpers are vying against each other to take control over your smartphones, tablets, cars, kitchens, living rooms and (not to make it sound creepy or anything), but yes, and your bedrooms!

The tug of war for human attention has stiffened between top AI helpers such as Google Assistant and Amazon’s Alexa. They were seriously pitting against each other at the CES 2018, both trying to hog the limelight based on their skills.

Though they are both adept in superior technology, there will be only one that will steal the show. So, which one do you think is going to be the #1 AI helper?

Well, we made your job easier. We bombarded these two AI helpers with a battery of questions to see how each of them responded, and here is how the two of them scored:

General knowledge: In past years people went to libraries and encyclopedias for answers, but now people simply ask their smartphones and computers. So GK is one area in an AI helper’s life where they have to be seasoned experts. What, do you think, would happen if these two AI helpers were bombarded with a series of 20 odd questions as a part of research?

Google Assistant won the rapid-fire round by the sheer strength of technology. It was able to give detailed information about the distance between Earth and Jupiter. It could also answer how long you can keep the chicken in the fridge before it got spoiled. Amazon’s Alexa didn’t do too badly either. But, did round up the number of meters in 5 miles.

Score: Google Assistant adamantly goes on to be # 1 while Amazon’s Alexa grudgingly settles for #2

Online Shopping: Using your voice to do online shopping is by far the ‘coolest’ thing that your AI helper do for you. Amazon’s Alexa had the obvious advantage here, courtesy of her integration with Amazon’s shopping catalog. However, Google Assistant had fumbled a bit in this department. One had to first accept the terms and the conditions for its shopping service before it would oblige you.

Directions: This is one aspect of our life where AI has taken over. When was the last time you left home without asking your smartphone for directions or the state of traffic? Google Assistant was bang on in this department. It gave near perfect time estimates, public-transit suggestions and traffic overview.

Sadly, Amazon’s Alexa goofed up. The app was cocky enough to reply “as the crow flies” when asked about the distance between two places. If you think you can handle it, try asking Alexa to calculate the estimated travel time between two places, it will refuse by stating that it cannot calculate your speed. Humorous? Yes. But useful? Not really. The directions also didn’t make much sense, but it fairly did well when it comes to gauging traffic.

Score: Google back to #1 again. Amazon’s Alexa will have to settle for #2 in this case.

Communications – Tired of chatting with robots all day long? Sometimes, you actually need an individual to talk. That is when you ask your AI helpers to make a phone call on your behalf or write a message to someone from your contact list.

Amazon’s Alexa happily allow you to call or send messages to another Amazon’s Alexa user on your list. It will also help you call any other phone number saved in your contacts Google Assistant, too, performs similar functions but you have to configure it first. Another thing about Google Home is that it does not allow you to send text messages to any number without a workaround using IFTTT.

Ordering Food – This forms an important part of our day to day life. And how blissful would it be if an AI could take over this task? Only if it could order food for us, recommend restaurants, offer to make reservations and download recipes for us! Are we imagining things or can life actually be this blissful?

Let’s ask Google Assistant! It did fairly well in all the above parameters. It was Amazon’s Alexa that fumbled here, and could not handle reservations at all.

Score: Google back to #1, and predictably so! Amazon’s Alexa, #2

So, have you tallied up the score already? It was a fierce competition between the two helpers though Google managed to come up to the top. Amazon’s Alexa is not very far behind, mind you. However, it would interest you to know that Amazon’s Alexa has a tiny but, negligible advantage over Google Assistant.

You have to say ‘OK Google’ to catch the Google Assistant’s attention. It comes across as a mouthful when you compare it to Amazon’s Alexa. All you have to do is call its name. Will it make a difference in their popularity?

Well, time will decide. At present, Google Assistant is still leading the AI helper’s squad with dignity and pride, and not to mention the state of the art technology! So there you go!

Everything You Need To Know About Mining Bitcoin

Online Marketing Skills Every Web Specialist Should Have