YEsportsBet.com experts decided to tell you a story about how a canceled project led to the development of the other, better one.

The story of Overwatch began from an end. In spring 2013, the job of a huge Blizzard Entertainment team that lasted for 3 years ended with nothing. The Project Titan, a third-person multiplayer shooter game intended to become the Blizzard’s flagship, was canceled. It was a bad time for the team of 140 artists, designers, programmers and engineers.

The history of Overwatch began with a rebirth.

The in-game plot tells of the recovery of the Overwatch organization. It used to protect the world from robot rising but was disavowed after an explosion that took the lives of its two founders. Now, the team reunites to restore order and peace in the world.

The plot story reflects real events that happened to Overwatch creators. After they canceled Titan, the team tore apart. 80 workers were moved to work on other projects. The remaining people received the task of life and death: to come up with the concept of a new game in six weeks to avoid new staff cuts.

Jeff Kaplan once told the pressure was extremely high at that time. Then, he offered team members to sketch out ideas for three games, devoting two weeks for each.

The first concept was the MMO inside the Blizzard universe. The other one was the MMO in a new setting. The third idea failed to overcome the early concept stage.

The Game with Multiple Classes

During the discussion about the second concept, they started the topic of character classes. Geoff Goodman, the designer, asked: why shouldn’t they use dozens of classes with fewer abilities each instead of going in for six classes with multiple skills?

Kaplan then said that his entire mind had been captured with that great idea after the meeting. Still, the concept was very challenging to make it real in an MMO game. Then, Kaplan looked at the sketches Arnold Tsang developed for Titan and reminded himself of a direction the team was working on before. The new game started at that moment.

It was not completely an MMO yet. However, after Kaplan came up with abilities for Tsang’s characters and started assembling a concept piece-by-piece, other members of the team got interested in his idea. Once, Ray Gresko, the producer, saw concepts and told Jeff to show it all to Chris Metzen.

Metzen was the creative manager for Blizzard at that time. He loved the idea of the game with regular heroes, characters and personalities instead of classes. The Widowmaker replaced the default faceless sniper. Widowmaker was the cold-blooded assassin who slayed her husband because of a contract. It is much more interesting to play when your character has some story behind the back. The team got a living character, a real personality. That is why Metzen supported them and told to work on the idea. 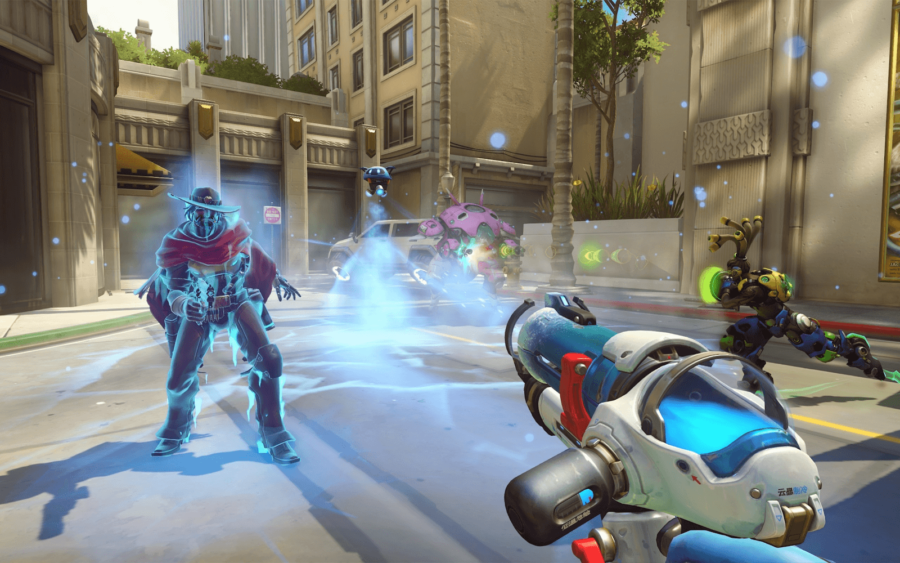 Until the end of that day, they had 48 concepts of heroes based on Tsang’s sketches or Internet pictures. The game should become a shooter. However, the question remained: what kind of shooter should it be? Some people thought the third-person camera was better to show characters.

Jeremy Craig, the designer, received the task to place characters at the foreground. He came up with menu animations and victorious poses for every hero. He also offered the idea of the “Play of the Game” called to demonstrate mastery of players.

Kaplan remarked that it would be simpler to create the meshed menu for characters. It would make players’ orientation easier and avoid any technical difficulties. Nevertheless, Jeremy convinced everyone that the first-person shooter should show every hero in detail to help players associate themselves with characters.

When the team was developing characters, their main goal was to underline differences and features. Players should be able to distinguish heroes in the middle of the fight seeing a silhouette, a color or an animation. Stories, phrases and personalities of characters were called to help players find their favorite avatars.

The original Tracer voice belongs to the actress Cara Theobold. She chose that lively tone together with Blizzard even before she saw Tracer for the first time. After she finally saw the character, she noticed her expectations confirmed. Cara’s voice suited Tracer’s moves perfectly.

The differences between heroes were not intended to be exclusively visual. The team planned to reflect every character in their abilities. When the beta-test started, developers were sure every hero should be able to dash forward.

Then they felt it was the wrong way. 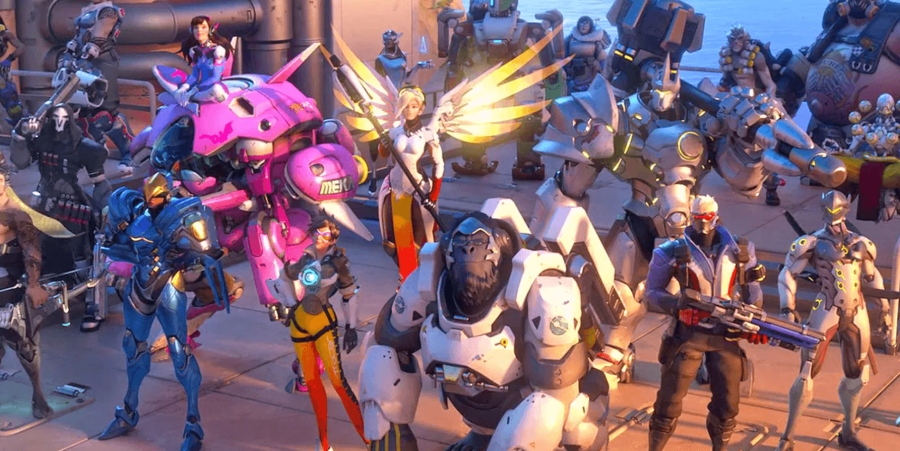 Finally, developers reached the diversity of styles that a huge variety of players might like. Along with the diversity, a wider vision of the setting appeared. They found a place for male and female characters there and this feature made Overwatch different from the most part of its competitors.

Jeremy Craig invested much effort in the basic idea of Jeff Kaplan. He used Arnold’s sketches, came up with names of all characters and offered to use state flags to underline nationalities of heroes.

Overwatch maps are also very diverse. Such levels as the Nigerian utopic city, a Greek island or a roof of the Chinese skyscraper are rare to see in other games. Although players can explore the world of Overwatch only through those maps and heroes, their diversity creates an amazing impression. You can expect anything from this game.

Thanks to those variations, Blizzard developers gave every character unique animations and phrases to make them even more exciting. As a result, every player can find his favorite Overwatch hero.

From MMO to First Person Shooter

Jeff Kaplan said, they decided to concentrate on distances and their perception when begat developing maps for Overwatch. Aaron Keller and Dave Adams, head level designers, understood connections between the camera’s field of view, height and speed. They also understood how the change of view influences the way players to perceive the speed of characters.

Using their status at Activision Blizzard, Blizzard could gain some support from Treyarch and Infinity Ward developers (Call of Duty) to adapt their shooter for the DualShock 4 controller. Colleagues did not only tell how they could get comfortable character controls in Black Ops but also showed the code providing it.

Overwatch and Its Legacy 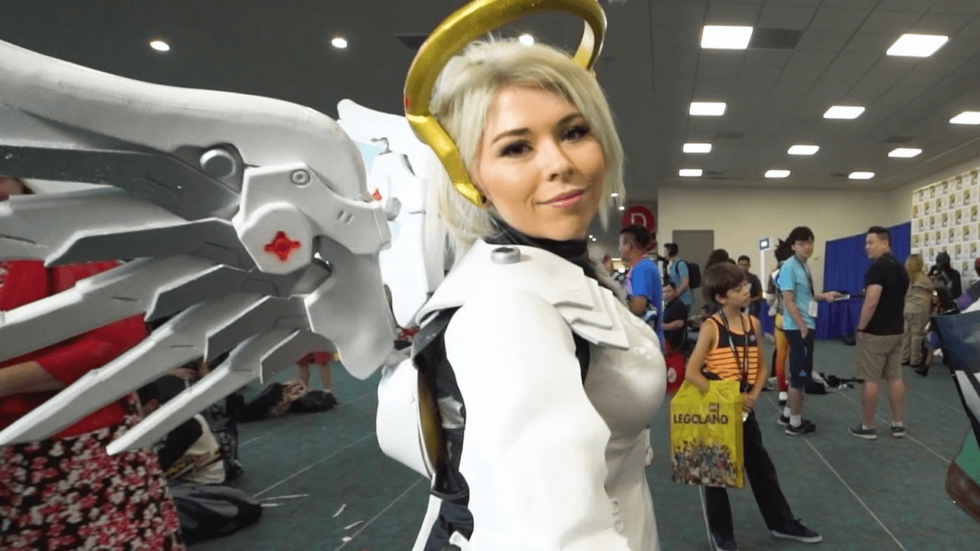 Since the moment of its announcement, Overwatch has been a very perspective project. It is difficult to call this game regular, especially after you see the speaking gorilla from the Moon shown in the first game trailer.

As a result, Overwatch attracted millions of different players. Many of them never liked first-person shooters before. The first PS4 player who reached maximum level in Overwatch, Desterix_452, was among them. His favorite champion is Lucio, because he is a universal support fighter.

The sudden popularity of the game was a surprise for Cara Theobold, too. She got especially excited during the Blizzcon 2016 event. Cara knew the game was popular, but she never thought it was THAT popular. Cara was amazed to see tens of cosplay enthusiasts wearing Tracer’s costumes and two huge sculptures of the hero who had her voice.

Overwatch won the “Game of the Year” nomination of DICE Awards 2017 and Game Developers’ Choice Awards. After that, developers who passed through all the trials and helped the game to reborn from the ashes felt confidence again.

Nevertheless, Jeff Kaplan doesn’t forget past difficulties. When reminding himself of those difficulties, he starts being even more proud of the entire way he walked through together with his team to create Overwatch.

TOP 10 Android Sleep Apps for You!

The Importance of a Business Card!