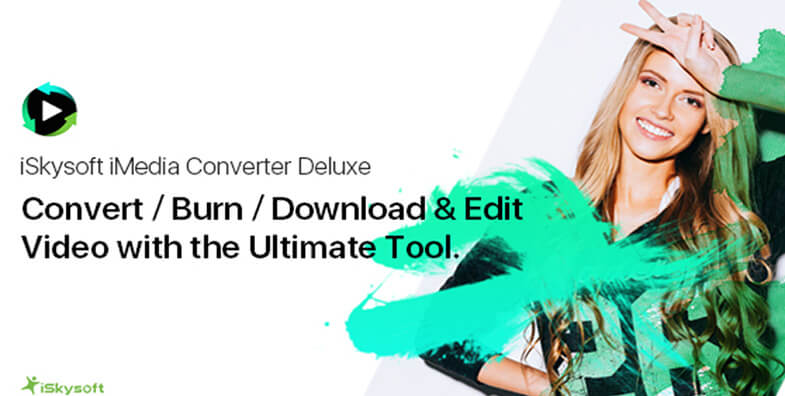 Watching videos is always an amazing experience. They get your mind relaxed or in other cases ease your understanding. Well, not all devices support every video format available outside there. These videos come in different formats, and at times conversion becomes inevitable. It, therefore, becomes crucial to have a
powerful conversion tool, capable of making your work easier and standard. This article details the top 10 video converter tools for Mac.

iSkysoft iMedia Converter Deluxe is no doubt the best Video Converter for Mac. It has a wealth of editing features that makes your conversion easier and exceptional. It converts audios, standard videos and HD videos file to various formats including MP4, MOV, M4V, AVI, and FLV among others for playback in many hot devices. It is built with a DVD toolkit that edits, burn and converts DVD files.

Pros
• iSkysoft iMedia Converter Deluxe supports a broad range of both audio and video files.
• Unlike other converters, you can download online videos from sites such as YouTube and Hulu among others.
• New formats are continually added for free.
• With this tool, there is no loss in video quality.
Cons
• None

How to convert videos with iSkysoft iMedia Converter Deluxe

Step 1: – Import Files
Go to the “Applications” icon to open the iSkysoft iMedia Converter Deluxe. Drag the files of interest to the program’s window. To select multiple files, hold the shift or command key while selecting. All the imported files shall appear in the primary window. 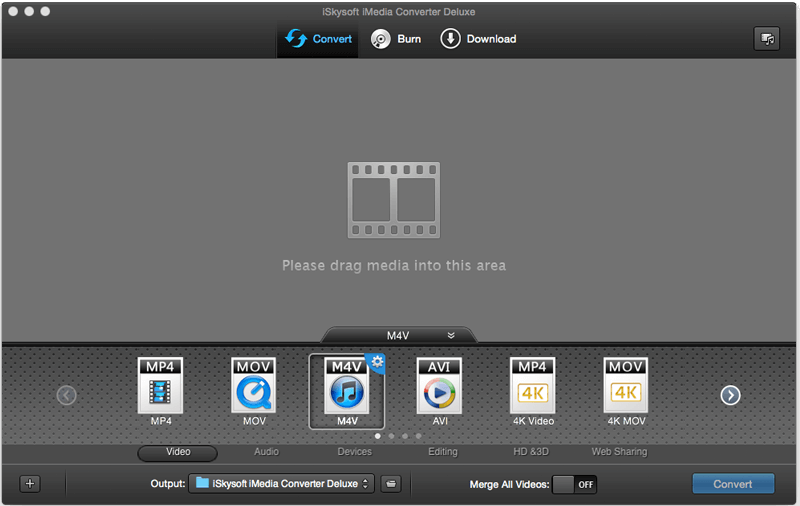 Step 2: – Select the output format
Find and click on the “Output” tab. Different output formats according to audio, video and device format. Select the appropriate format.

Step 3: – Begin the conversion
Click on the “Convert” button. The conversion process will immediately start and end within a short time. Once the process completes, you will get a prompt message asking whether you would like to open the output folder or not.

MacX Video Converter Pro is a powerful Mac OS video converter featuring over 320 and 50 video and sound codecs, respectively. You can convert from various formats including MP4, MOV, WMV, and MKV among others on Mac in 4K HHD/HD 1080P/720P for playback on many mobile devices. To be precise, about 350+ mobile devices are supported, including Samsung Galaxy, iPhone 6S/6S Plus, iPad Pro/Mini 4/Air 2 and many others.

Pros
• MacX Video Converter Pro supports a large number of video formats in the 4K UHD/HD/SD.
• With this tool, you can convert any video to as many as 350+ iPhone iPad Android devices.
• This tool has the fastest conversion speed, thanks to Intel’s Quick Sync Video hardware acceleration tech.
• This application has an added advantage in that you can download any video, movie, or music for free from over 300 sites.
Cons
• The DVD ripping function needs to be integrated.

Aiseesoft Mac Video Converter is one of the best video converters for Mac capable of handling a large number of formats including MKV, MP4, MOV, and AVI among others in HD. Furthermore, this tool converts video on Mac devices for popular portable devices such as iPod, iPhone, Apple TV, PSP.

Pros
• Aiseesoft Mac Video Converter supports a wide range of video formats in Mac.
• With this tool, you can convert 2D to 3D video using the many 3D options provided.
Cons
• It supports limited video formats
• The downloader is only available in the licensed version.
• It is unfortunate that there is no support for the 4K UHD.

Handbrake is another ideal video converter tool for Mac. Handbrake users prefer this software to others due to its free DVD ripper function. It is excellent in transcoding many video formats into MP4 or MKV for various players or devices like Android and iOS.

Pros
• It is a free video converter tool.
• This tool is capable of integrating DVD ripper into one.
• This application has a high speed of conversion and reserves the quality of the video.
Cons
• The only supported output formats are MP4 and MKV.
• This tool is not capable of downloading online videos.

iFunia Video Converter is another excellent video converter tool for Mac. It is capable of converting HD/SD videos on Mac either from or to several video/audio formats like AVCHD MTS, M2TS, H.264/AVC, HD MOV, and AVI among others. DVD files such as DVD Ripper are supported as well as conversions of videos for portable devices.

Pros
• This tool supports a wide range of HD/SD formats.
• This application can convert all formats into 3D.
• This converter supports the conversion of DVD files.
Cons
• There is no support for 4K UHD videos.
• Some popular devices like iPhone 6S/6S plus are not supported.

Pros
• This tool supports a wide range of video formats in Full HD/SD.
• It supports over 200 portable devices.
• With this tool, you are guaranteed faster conversion speed on no loss in the video quality.
Cons
• Extra features such as video burning and the ability to download online videos are not well considered.

ImTOO Video Converter is an outstanding HD video conversion tool for Mac. You can easily convert HD/SD video audio formats such as MKV, MTS, HD WMV, MP4, and AVI among others for playback on devices like iPhone 6S/6S Plus/6/6 Plus, Apple TV, iPad, PSP, PS4, BlackBerry and much more.

Pros
• This tool supports a large number of video audio formats.
• This application supports conversion of videos to the popular portable devices.
• With this tool, you can convert from 2D to 3D and from 3D to 3D.
• This software has many video editing features.
Cons
• It does not offer extra features like online video download.

Xilisoft Video Converter Ultimate for Mac is an excellent multi-functional Mac converter for HD/SD conversion in OS X. It can convert nearly every video audio format in HD/SD for portable devices like iPhone, iPod, PSP, Zune, and mobile phones among others.

Pros
• This tool supports a wide range of video audio formats.
• This application supports both 3D and 2D video conversion.
• There are a good number of video editing features.
Cons
• The subtitle option is not provided.

It is one of the best Mac video converters that support conversions of audio/video formats for various popular portable devices. There are up to 6 different 3D modes available to allow conversion from their respective 2D formats.

Pros
• This tool supports a wide range of video and audio formats.
• With this tool, you can convert 2D to 3D videos.
• This tool offers a faster conversion speed and keeps the quality of your video.
Cons
• It does not provide extra functions like online video downloader.

Pavtube Video Converter for Mac is a robust tool capable of converting virtually all SD/HD videos from formats such as AVI, WMV, and MP4 among others to video audio formats for various portable devices.

Pros
• This tool is rich in editing features.
• This application supports a wide range of both input and output formats and devices.
Cons
• This tool does not allow online downloads of videos.

How to Recover Deleted Data on iPhone