Every year, Stack Overflow polls its user database on a number of different technology topics. This is currently one of the most anticipated survey as it allows an insight into the world of technology and also offers indicators to upcoming trends.

This year, Stack Overflow polled over 100,000 respondents – making this their largest survey yet! With over a 100 different questions related to the world of technology, this 30-minute survey covers everything from favorite technologies to job preferences.

There are a few different numbers of takeaway from the survey including:

Python is becoming a popular back-end language, this year surpassing C# after surpassing PHP in 2017.
DevOps and Machine Learning are important trends in the software industry this year.
Women and Men have different priorities when it comes to assessing a prospective job – where women prioritize company culture and opportunities, men prioritize compensation and working with specific technologies. 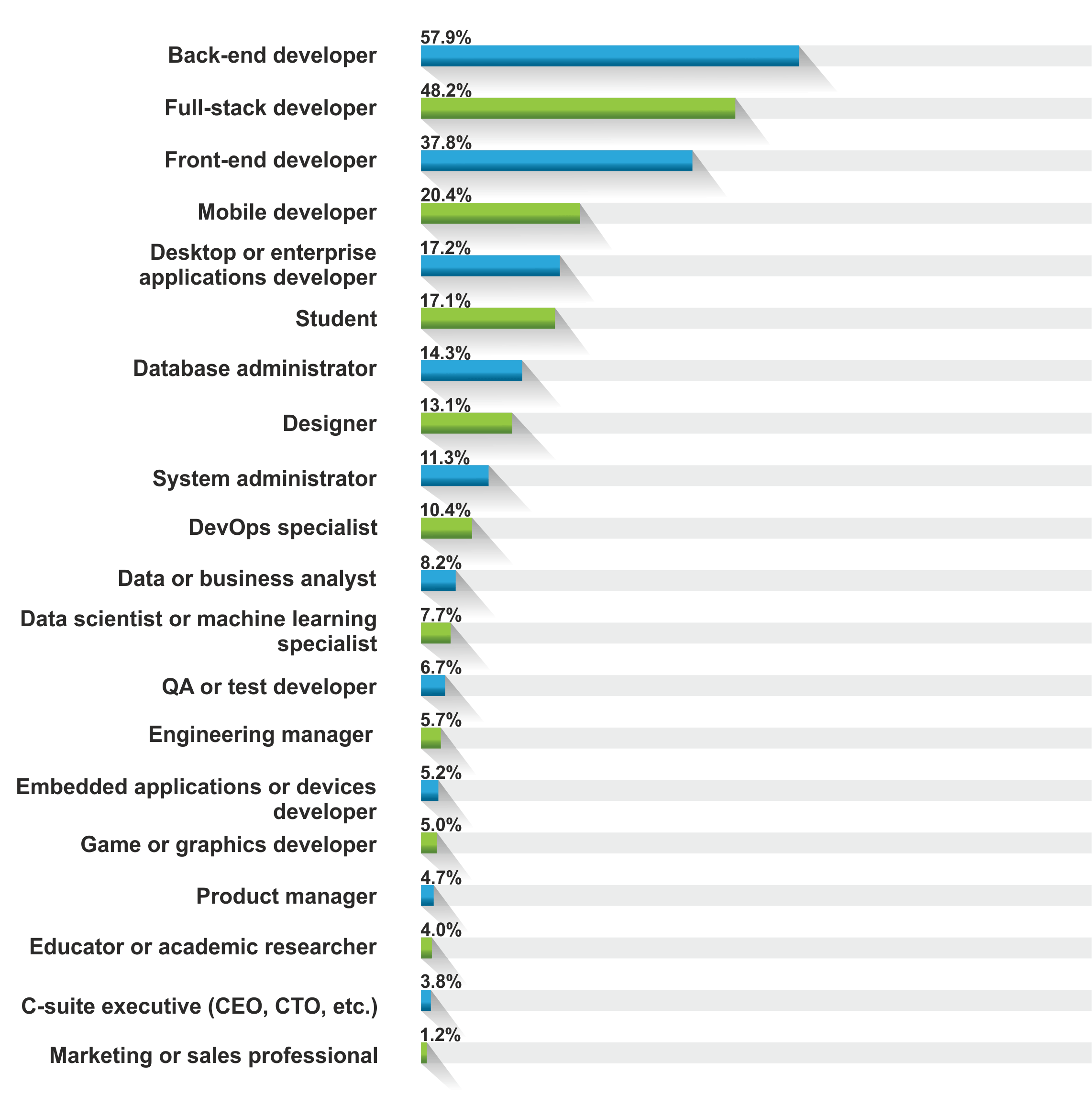 For many developers, coding and programming doesn’t end when the office does. Around 80% from the 98,855 developers claimed that they coded as a hobby even outside of the office. Those who had additional responsibilities such as children or exercise were more likely to code as a hobby.
Years Since Learning To Code 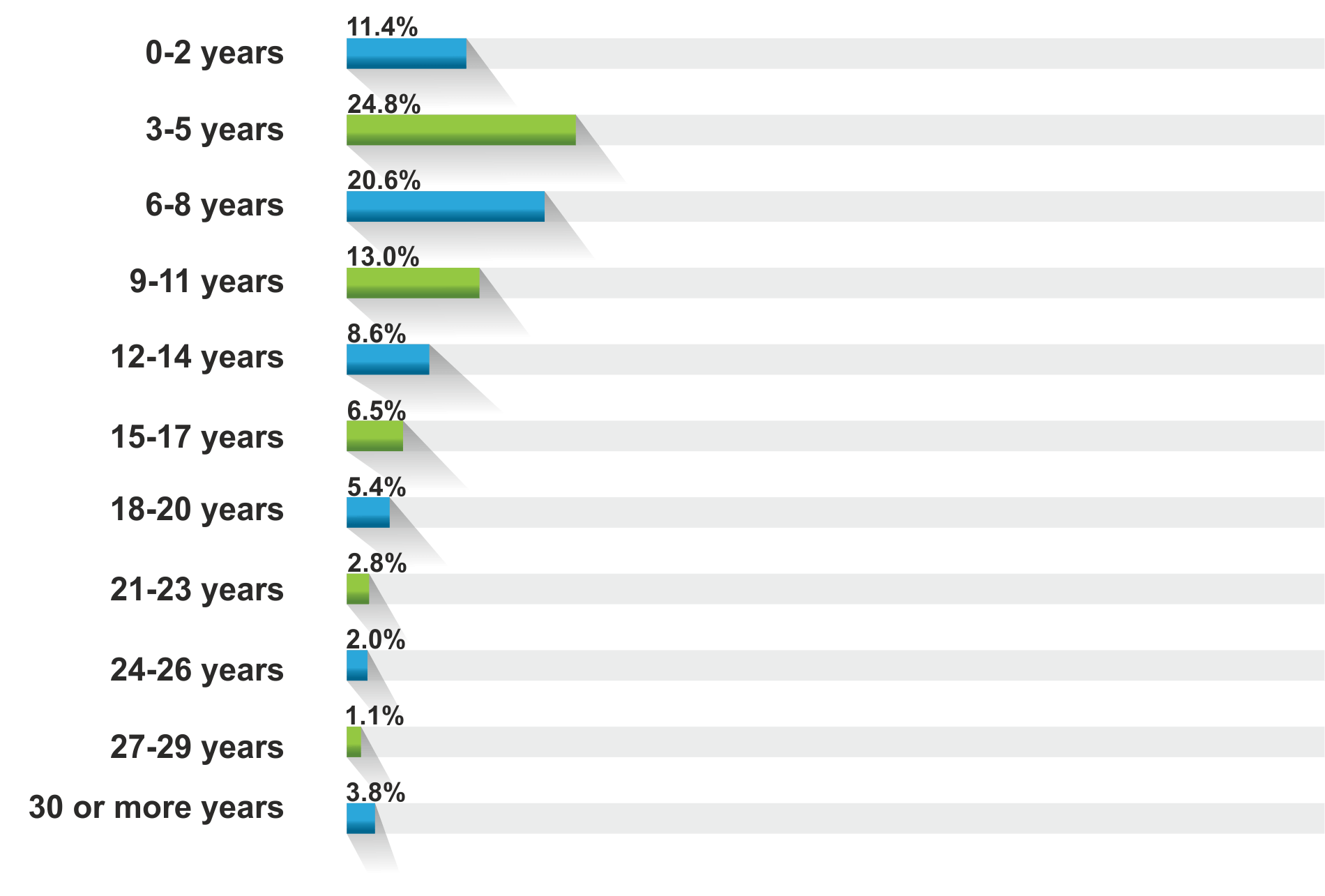 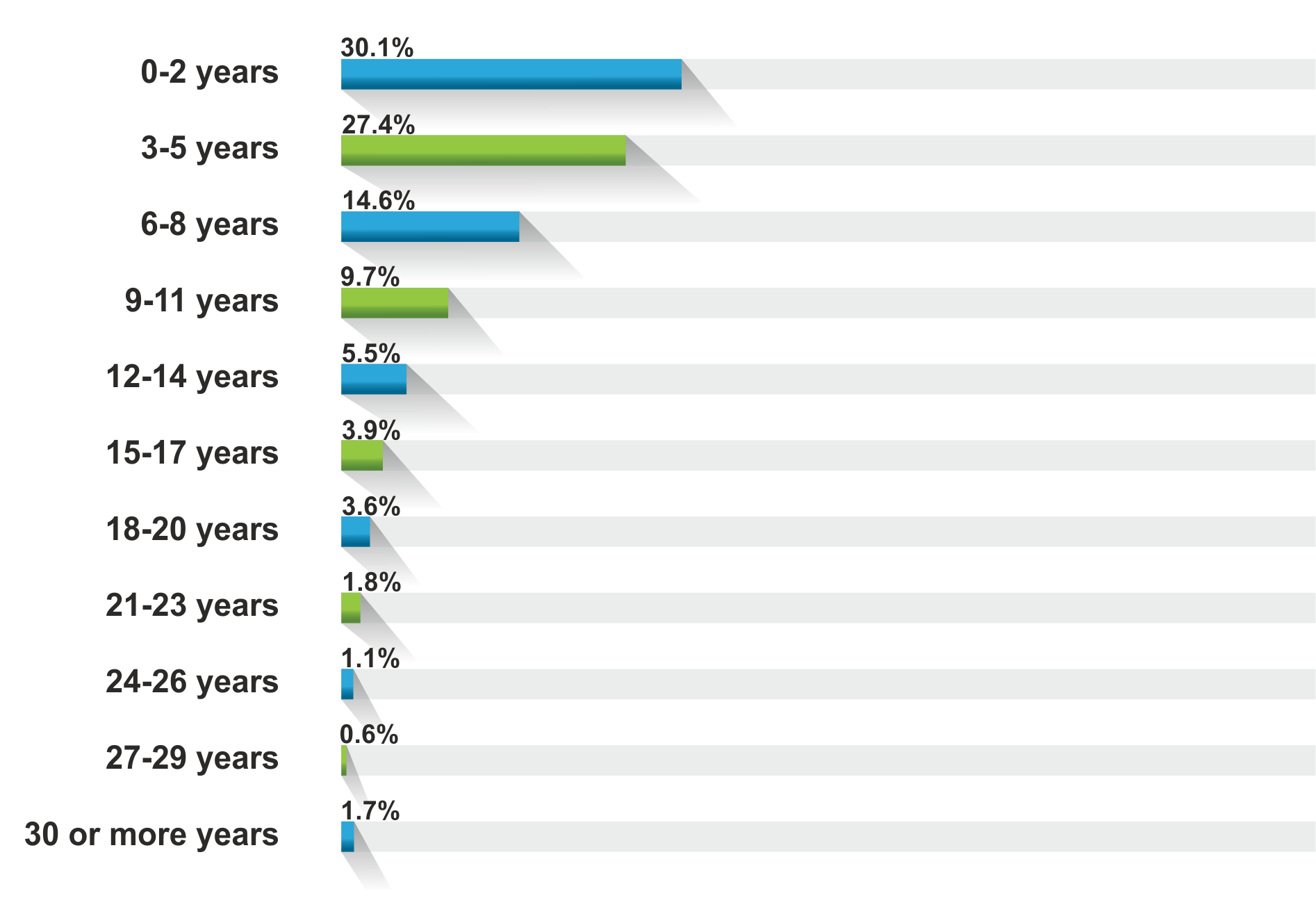 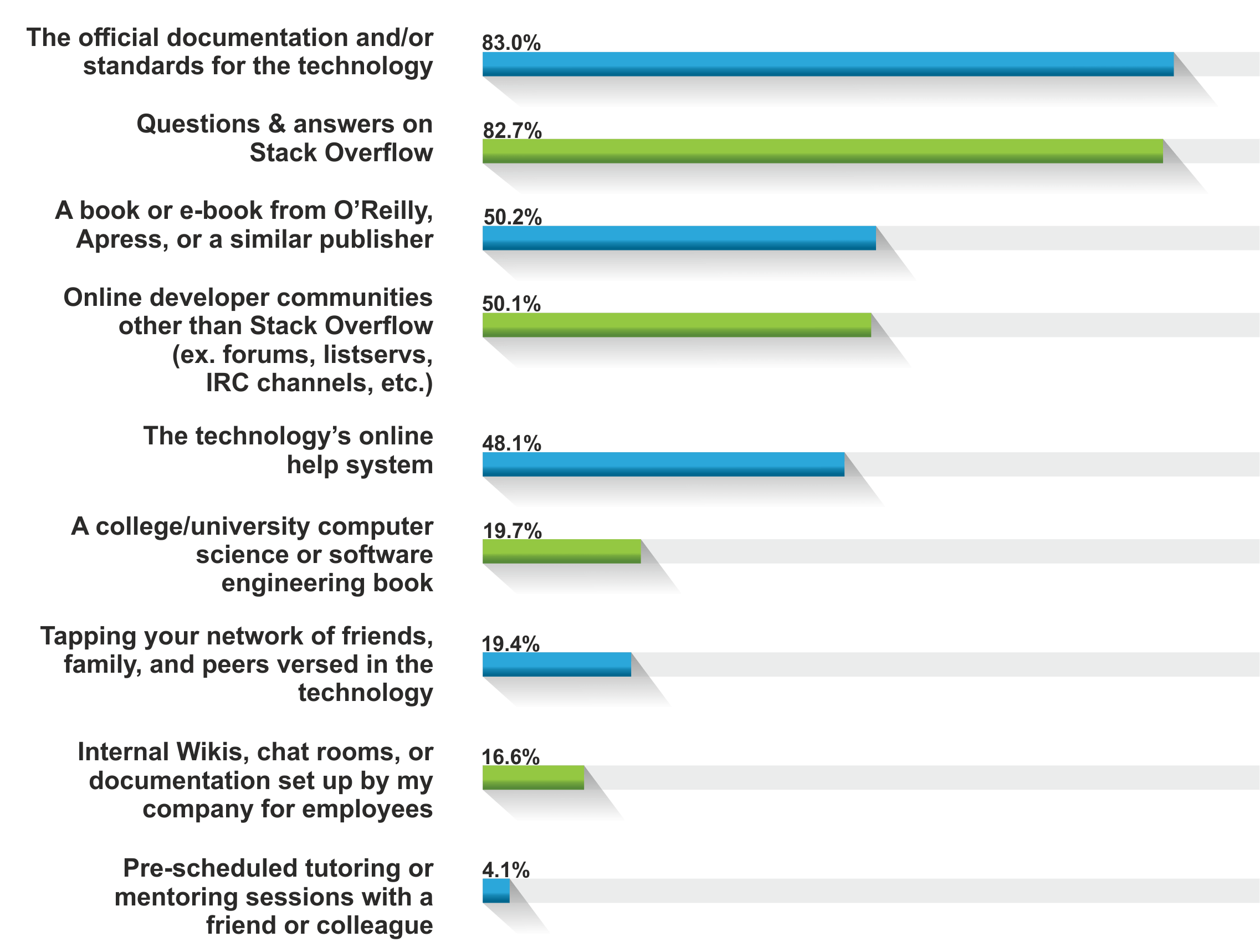 There are now many different resources to learn programming including books, ebooks, online courses, Q&As and even documentations. Documentation is often the best source and also the most preferred source for developers to learn a new technology as around 83% developers rely on documentations. Around 82% use the Question & Answers section on Stack Overflow to learn from peers. 50% rely on published books as well as on online development communities.
Gender in Programming

Programming is still largely skewed when it comes to gender. With more than 92% of the stack overflow users male and only 7% female, there is a vast gap between the two.
Age of Programmers

A large number of respondents are under the age 35, with almost 50% falling in the category of 25-34 years old. This was followed by 24% in the 18-24 age group.
Time Developers Spend on a Computer

The life of a developer is not easy, it requires hours and hours spent in front of a computer screen. 53% developers claim that they spend more than 9 hours in front of a computer, while 31% claim they spend 5-8 hours a computer.
Now that we’ve taken a look at the programmer, let’s now turn to the popular technology trends. The next couple of sections should give us an insight into the different technologies, languages and frameworks that are currently in demand on the market.
Popular Programming Languages 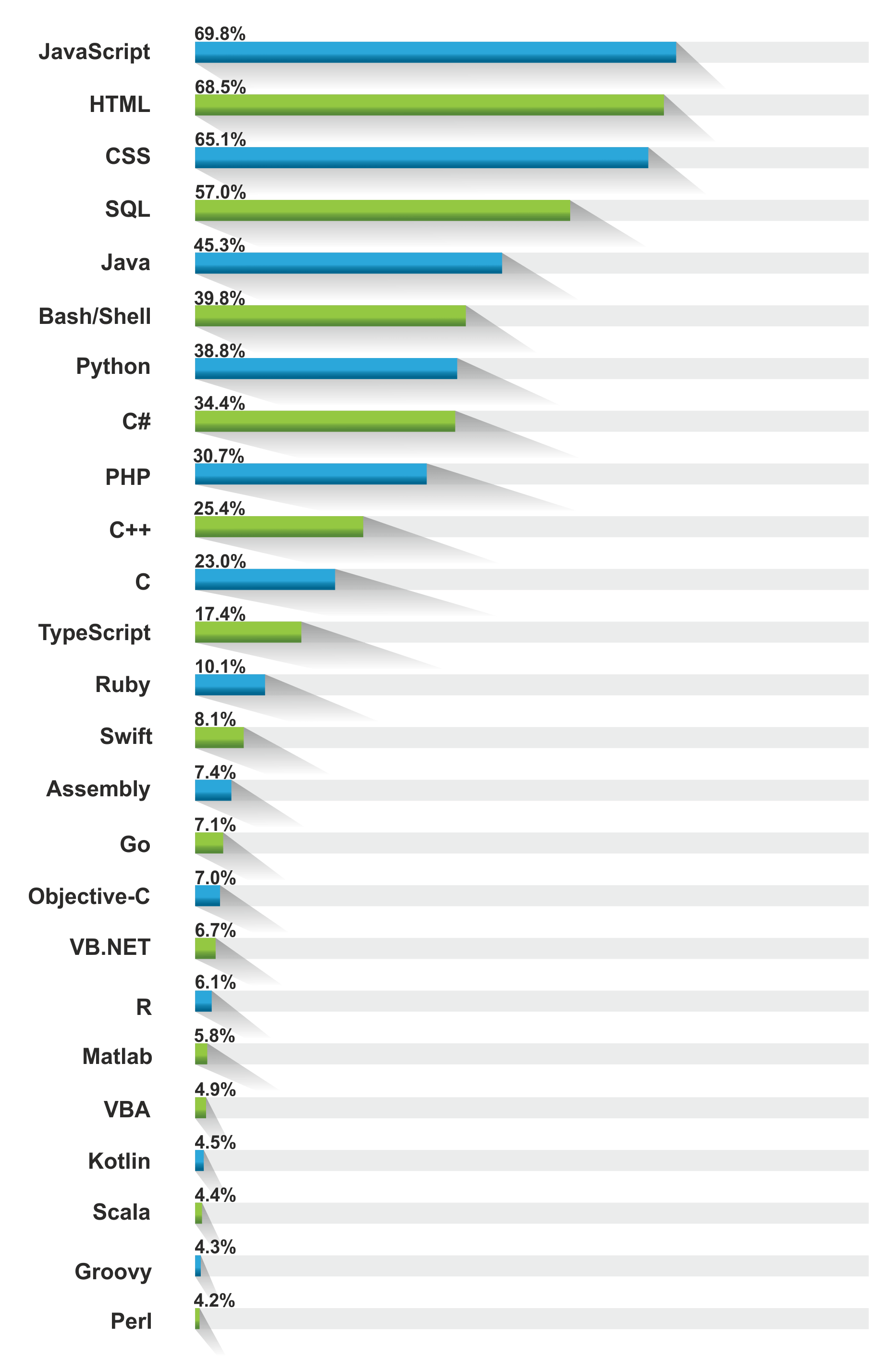 JavaScript continues to hold the mantel for the most popular programming/scripting/markup language for the sixth year in a row. HTML, CSS, SQL and Java follow with 68.5%, 65.1%, 57% and 45.3% respectively. Python is the fastest growing language and currently falls somewhere in the middle with 38.8%.
Popular Frameworks, Libraries and Tools 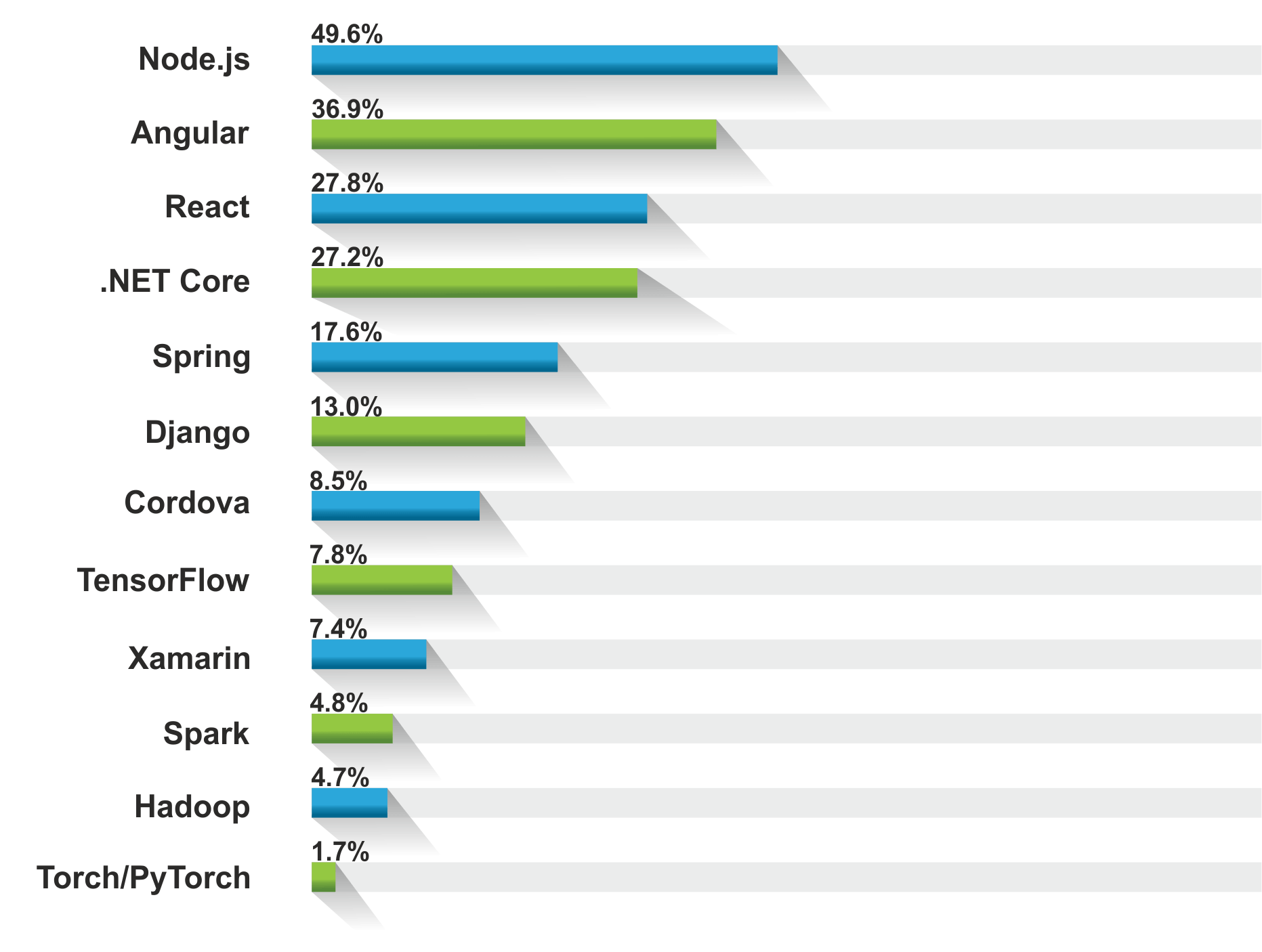 When it comes to frameworks, libraries and tools – Node.JS dominates the rest with an almost 50% respondents choosing it as their primary framework. Angular, React and .NET core follow Node.js as important technologies. Torch/PyTorch, Hadoop, Spark rank lower on the list.
Popular Databases 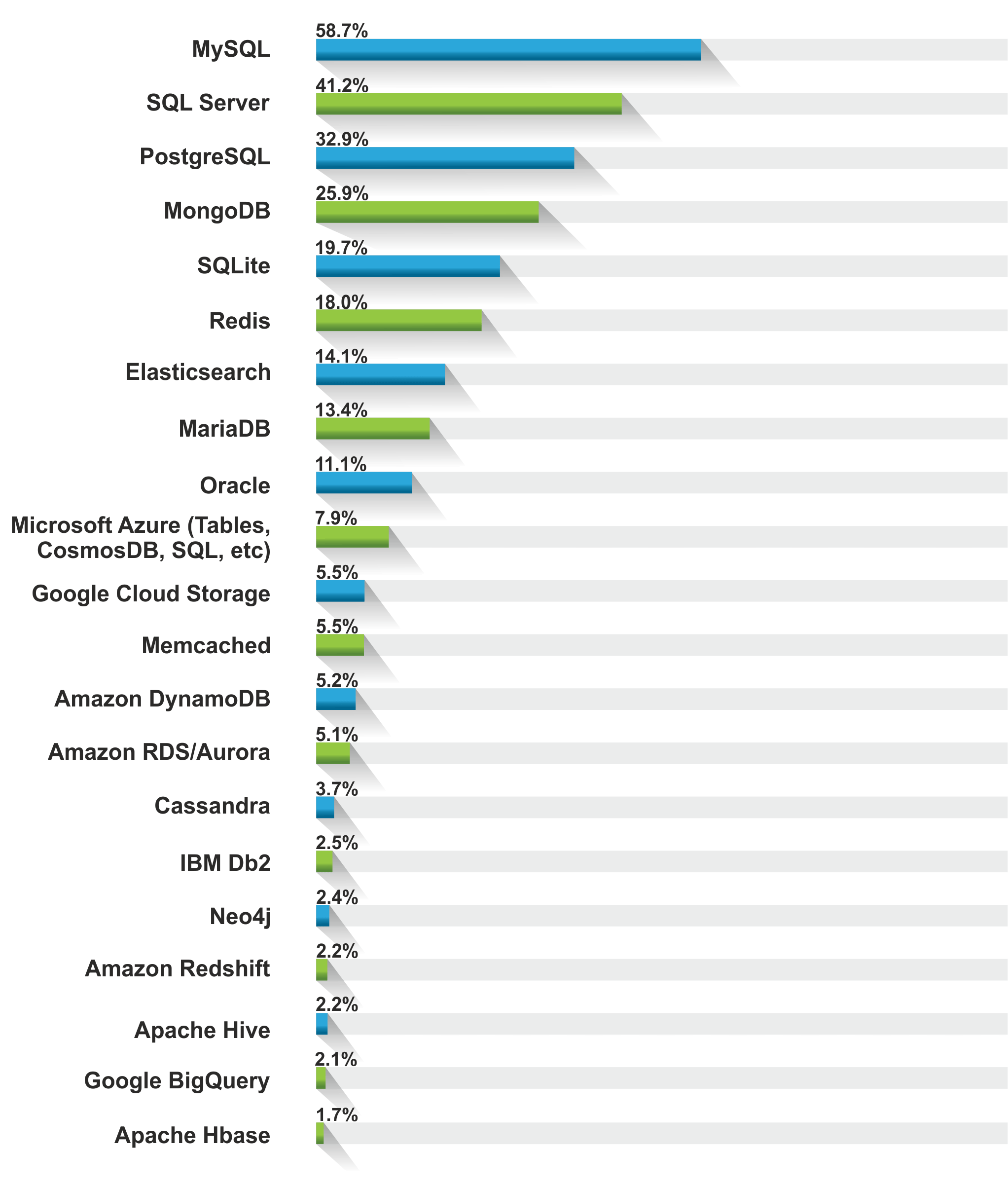 MySQL leads with 58.7% as the most used as Database, while SQL Server is not behind with 41.2%. These two are followed by PostgreSQL and MongoDB with 32.9% and 25.9% respectively. Surprisingly big names like Amazon (Redshift), Apache (Hive and HBase) and even Google (BigQuery) end up on the lower rungs.
Popular Platforms 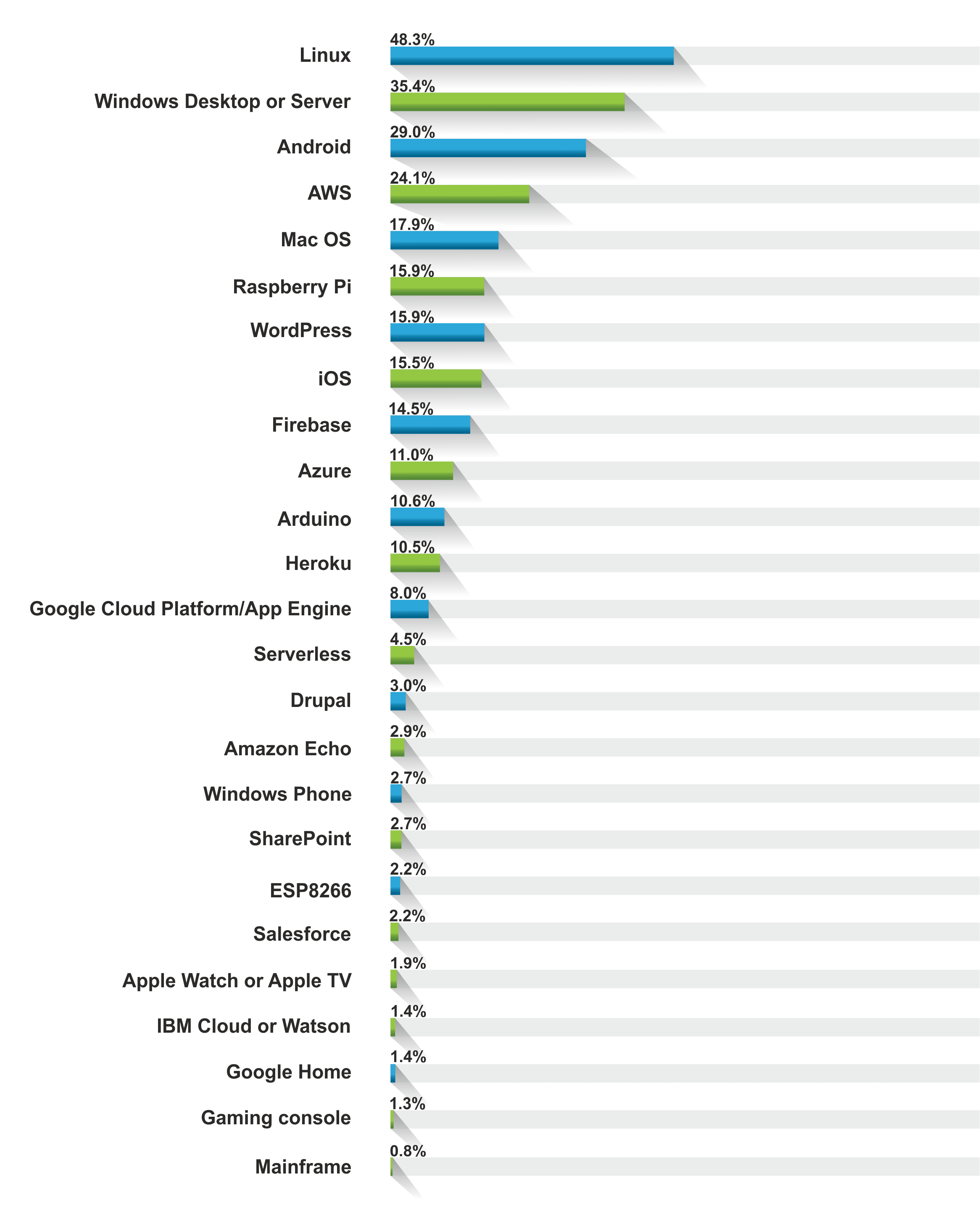 The most commonly used platforms in this year are Linux (48.3%), Windows Desktop or Server (35.4%), Android (29%) and AWS (24.1%). Apple Watch or Apple TV, IMB Cloud, Google Home made it to the bottom of the list, with very few people working on these platforms.
Popular Development Environments 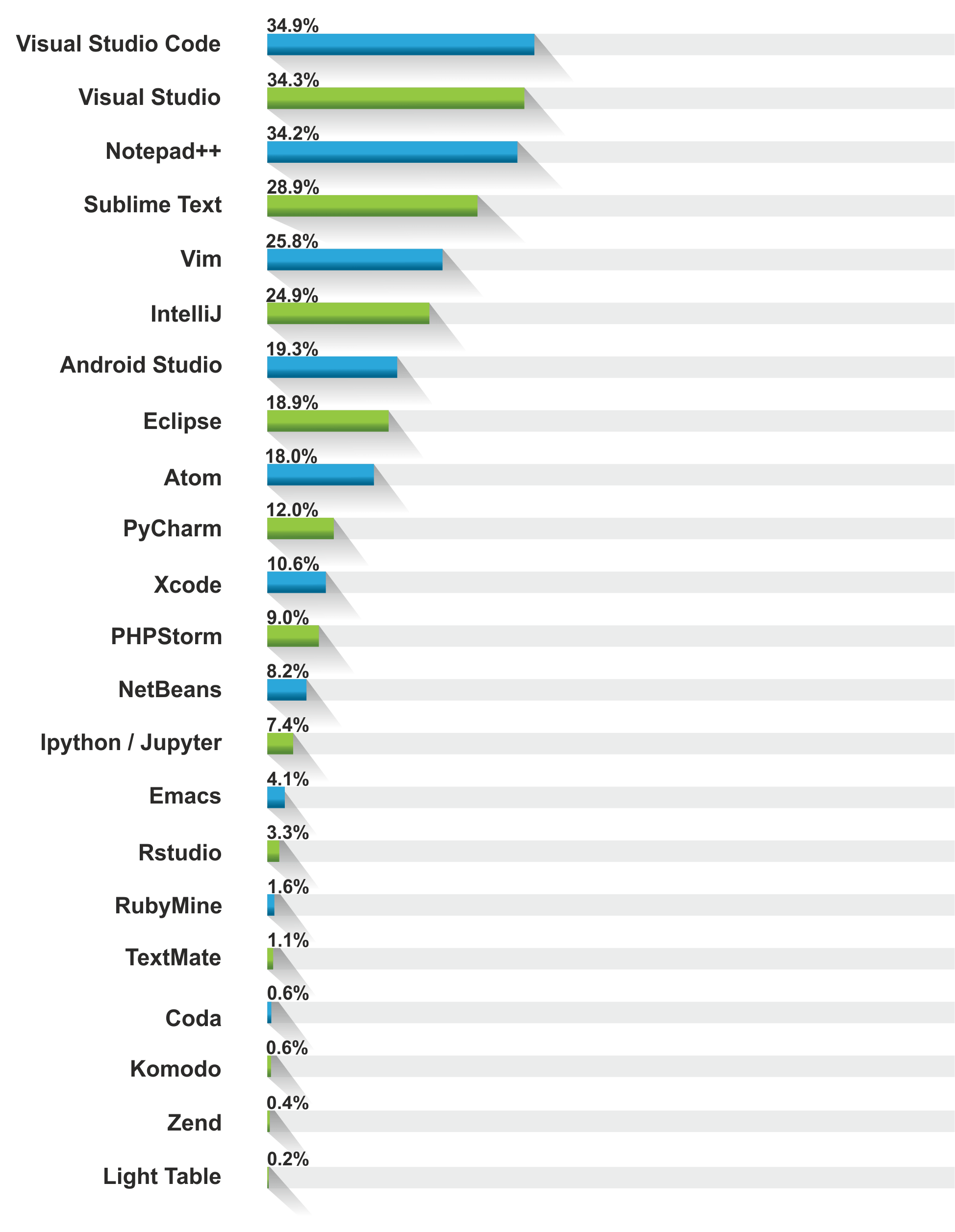 Windows is still the most preferred operating system with almost 50% of respondents still using it for their programming needs. MacOS and Linux go head to head with each bringing in 26.7% and 23.2%, respectively.
Now for the biggest question that is one of the most common factors of why people get into programming and development in the first place – which language rakes in the highest salary around the world.
Programming Languages According To Earnings 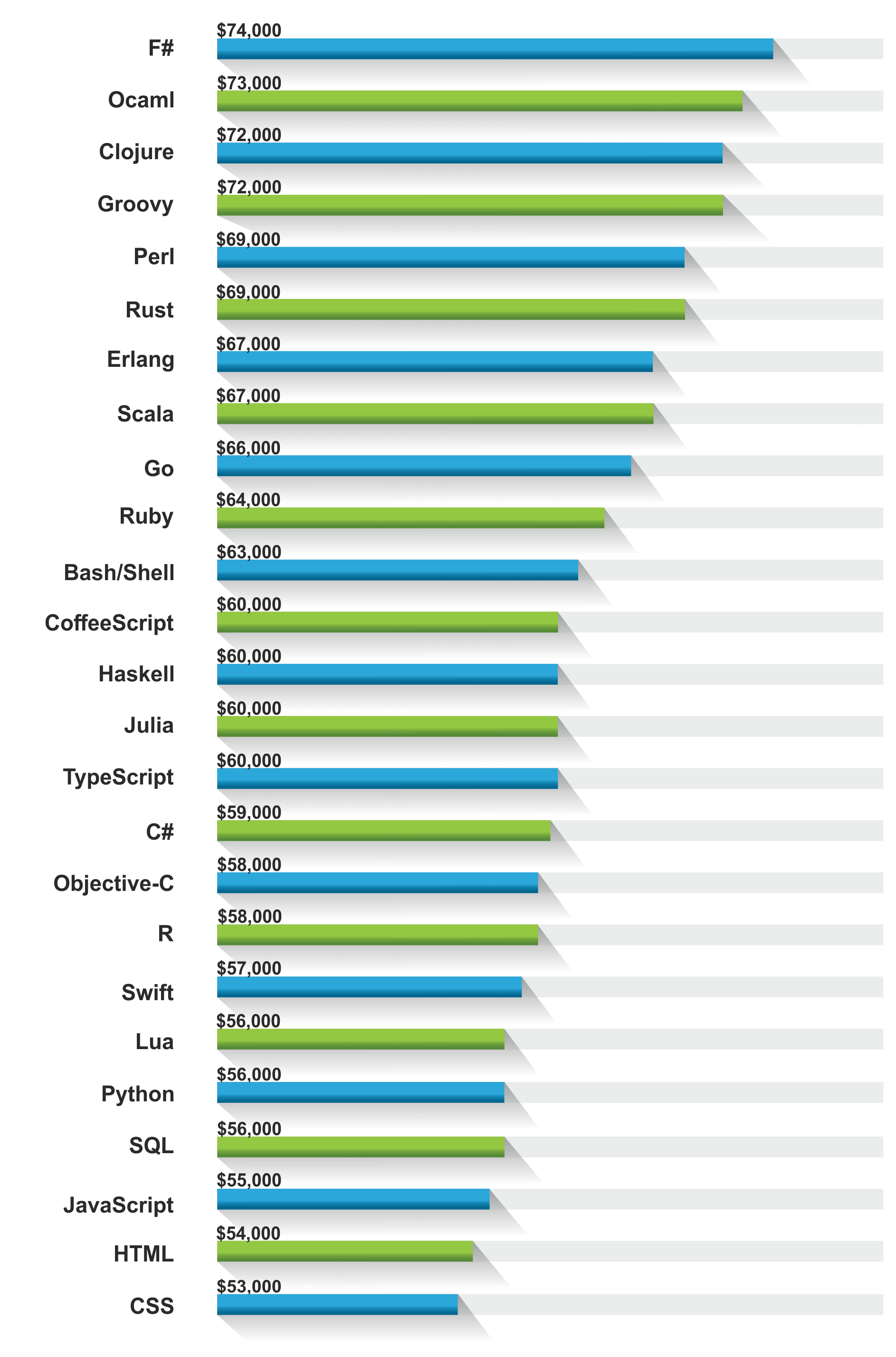 F#, a mature open source, cross-platform, functional-first programming language is the top earner worldwide bringing its developers $74,000 annually. Ocami follows close by with $73,000 and both Clojure and Groovy rake in $72, 000 each. Popular languages such as Python, JavaScript, HTML and CSS rank the lowest with an average of around $53,000 to $56,000.
Summary: –
The changes in the world of technology are vast and if we follow this survey, then a few trends that we are bound to see is that DevOps, AI and Machine Learning are definitely going to become big. Back end languages such as Erlang and Python are gaining more importance and JavaScript is still the number one programming language on the market. We can also expect more people to get into development jobs, a trend which won’t die down anytime soon.

10 Tips for Building a Resume and Doing a Job Interview

How is IoT Impacting Cybersecurity Technology?