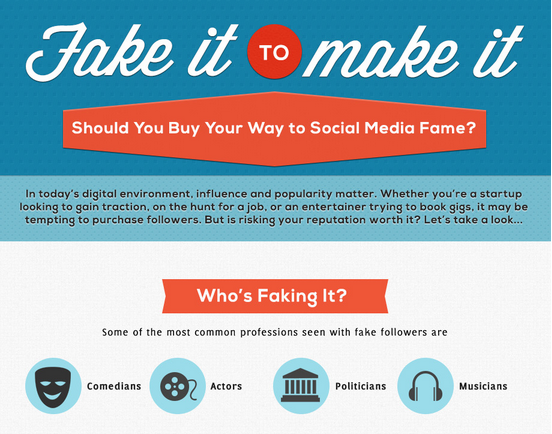 This goes a lot against what I’ve said in my post about why it’s bad to buy Twitter followers, though the infographic is very professional and does make a few good points. Isn’t necessarily meant to make you go and buy Twitter followers, but you could say that it clears some air and shows just how many people are able to get away with it.

I’ve learned to tell the difference between a real Twitter account and a fake one quite quickly. In the past couple of weeks I’ve noticed a new trend forming where marketers and other tech people will follow ONLY the most influential profiles on Twitter in hopes that they will follow them back, and then go on and brag about it on their blogs and guides..pathetic.

I prefer natural growth over anything, and as much as I’d like to say I am the good guy here – I’ve not purchased Twitter followers, but I’ve used things to help me boost my presence on Twitter. I’ve no problem admitting it, and I’ve no problem admitting that it wasn’t very wise and I did get punished for it. I’m now practicing only legitimate ways of gaining followers, and it’s much better than always being stressed out whether it will work or not.

I was tweeting out tweets that apparently included ‘too many @ mentions’ and I was told that I should stop doing it. I did of course get mad, and for a few hours I thought what a bunch of dicks they are. It did later occur to me that I’d probably be as pissed as the next person for having to deal with too many uncalled for mentions.

This infographic doesn’t look at small scale stuff. This is the real deal, the people who’ve got millions of followers and it’s pretty much next to impossible to differantiate real from fake and you can rest assured that Twitter staff is not going to throw Obama out of Twitter any time soon, not for having 35M+ followers and 75% of them fake. Nope!