Android instant app is a brand new feature that has been introduced to Android recently. The feature allows android users to run apps instantly, instead of installing them first. This is what users have always wanted in their apps; apps that are fast with a beautiful interface, those that guarantee high performance and have great capabilities. With just a single tap, this is what they get with instant apps.

For developers, your users are able to access a cloud-based version of your app through their android phones without being required to install it first from Play Store. Instant apps save so much of users’ time and effort. It is also an opportunity for companies to let their users try their app first before they install it.

Android instant apps have changed the way developers built their apps and also how users use these apps. They are a little different from the apps that have been in use for instance in the number of features an app can carry. An app from Play Store can for instance have just one feature or multiple features. This is not the case with instant apps; they only carry just one feature.

Users of android instant apps can only use a single feature of that app without the need to install the app with all its other features. When you request a certain feature from the instant app you are interested in, you will only receive the code that is necessary to run that specific feature. When you are done with the feature, the system will get rid of that code. 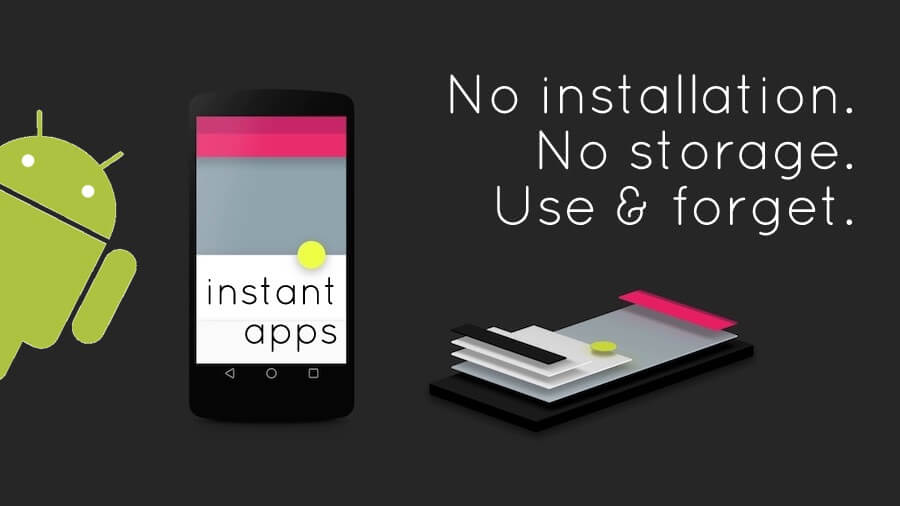 Every feature in an instant app will have at least one activity, which acts as the entry point for that feature. This is the point which hosts the UI for the feature as well as defining the overall user flow. This happen in such a way that when a user launches the feature on their android device, what they see first is the entry-point activity. One feature can have more than one entry-point activity but it is just one that is needed.

For developers to be able to meet this on-demand downloading of features by their users, they should break down their apps into smaller modules, and then factor them into feature modules. If you are building an instant app, you will get instant app APKs, which contain one or more feature APKs. Each of these is built from the feature module in your app and it can be downloaded on demand by your users as well as launched as an instant app thereafter.

Every instant app should have just one base feature APK. This is what you have if your app has just one feature. However, if it has other additional features, they will appear optional. The base feature APK will always be downloaded regardless of the feature the user will request.

How to use Android Instant Apps

For apps that are already on Play Store, users can download a feature of an instant app directly by just clicking on its link. Once the request is received by Google Play, you will receive the corresponding feature APKs for that particular feature to your device. The Android system will then launch the feature.

Unlike other apps that can only be accessed through Play Store, Android Instant Apps can be accessed from anywhere. Users can access such apps from any URL including social media, search, messaging and any other deep link. You do not have to install the app first.

Instant apps are however not accessible in all Android devices at the moment. Google is rolling them bit by bit. It is important to first find out if your android device have access to these kinds of apps, then enable ‘Instant Apps’ on your device and you will be good to go.
• Go to your phone’s settings menu
• Scroll down to personal category, then select Google
• Go to services category, then select Instant apps
• Tap on the toggle that appears on the top-right side of the screen
• Go through the instructions and terms and conditions, then click on ‘Yes, I am in’

When this is done, you can now search for and use instant apps. If you have an instant app that you want to use in mind, perform a Google search. Scroll the app listing until you find one that includes the word ‘Instant’. Tap to open it.

You should be able to use the app once it loads just the same way you would if you downloaded it from Google Play.

Note: – Android Instant Apps are accessible in all the latest Android devices from Android 5.0 (API level 21) up to Android 0. Users in more than 40 countries now have access to these types of apps.

All developers need to do is upgrade their existing Android apps so as to make them accessible by users as Instant Apps. You do not need to build a new app, separate from what is already there. Instant apps have the same Android APIs with the existing apps. They are the same project, with the same source code. You can access all the tools that you will need in order to modularize your app from the Android studio.

Android Instant Apps are what many mobile device users need. This is because they provide users with a beautiful and immersive app, with smooth animations and material design without being required to install them on one’s device. They are the future of Android and a chance for one to save time and effort as they access great features on their preferred apps.

WordPress Vs Wix: Which One’s Better?

Learn how to Write Multi-Threaded Code in Java