Development companies are no longer operating in a single development sphere, they must now be able to support a lot of different services, as well as build and deploy apps for multiple clients on multiple operating systems. All of this tends to take a toll on the system, especially when you are running a traditional monolithic architecture for building, running and deploying your apps.

This is where the trend is now shifting, companies are now taking a closer look at microservices and in the last couple of years it has become a huge deal! According to Google Trends, there is a spike in the term ‘microservices’ from 2014 onwards that shows no sign of slowing down.

The buzz surrounding it has been escalated even further by big companies such as Netflix, Amazon, PayPal, etc. who are now using microservices to scale their businesses to newer heights. Even the President of SAP believes that this is going to be the future of development.

So, what exactly are Microservices?

Microservices, also known as a microservices architecture, is a style of structuring your application as a collection of loosely coupled services makes it easier to add, modify and ensure continuous delivery/deployment of large, complex applications.

To simplify it further, microservices allow developers to design an entire application by using a suite of different software systems, each running its own process and working by communicating through lightweight mechanisms, such as APIs. This allows developers to use multiple different technologies, languages and features to design one single app.

Another reason for the popularity of microservices includes the ability to scale or modify a section of the app without having to modify the entire app. In a monolithic design, modifying the app would require having to make changes across the entire architecture, while under microservices, all you would need to do is modify one segment or API and simply change that aspect, making continuous deployment easy and hassle-free. 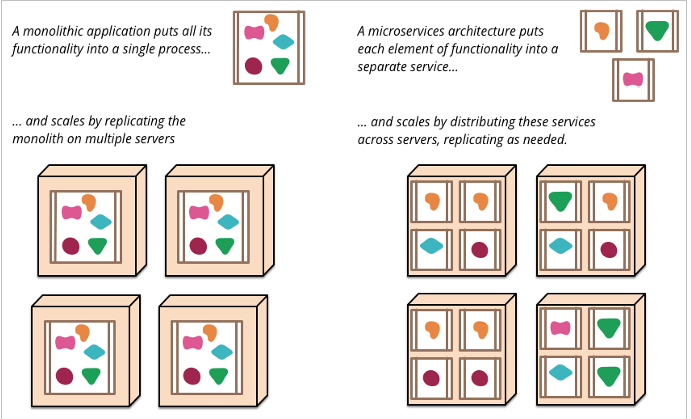 Monolithic architecture styles work best for small applications that don’t require a large of number of different services that need to be handled. However, as the app grows in size, monolithic style becomes more difficult to handle, deploy, scale, and even test.

The main difference between the two is a monolithic application is built as a single unit. A common enterprise application is built in three simple units – client-side user interface (includes HTML pages that are often displayed on a browser), a database (data inserted into tables, commonly in a relational, database management system), and a server-side application (the hardcore coding that handles HTTP requests, executes logic, retrieves and updates data, etc.).

Read more :- How to Do Live Video Promotion To Make Your Brand Successfull

All your logic for handling a request runs in a single process that is divided into classes, functions, and namespaces. Now, using a series of tools and a deployment pipeline, you can make changes to sections and test and deploy the app. However, as the app grows – the entire system works in a series of ripples. A change made to one section of the app, can cause an effect to another aspect of the app, which requires testers to conduct some rigorous testing to ensure that the app continues to run smoothly without any problems.

Now, when you execute the same situation in a microservices architecture, each application is divided into suites of services. These services are all individually deployable, scalable and allows using multiple languages to write the app. Each service can also be managed by different teams. And if you modify a single unit, you don’t have to worry about having to update or modify all your units, you will only need to modify and scale that one unit. The rest of your app will work exactly the same way. This gives developers the freedom to scale, test and modify apps as they see fit and without causing the entire app to crash.

While there is no distinct definition of what software services need to be a part of a microservices architecture, there are 6 characteristics that are commonly used to define it.

Multiple Components – Software built using microservices can be broken down into multiple components. Microservices allow developers to combine different frameworks, languages and technologies to build one app. These services make it easier to deploy, tweak and then re-deploy the entire app.

Built for Business – Microservice architecture utilizes cross-functional teams unlike a traditional monolithic development approach—where different teams each have a specific focus on, say, UIs, databases, technology layers, or server-side logic. Ideally, microservices are more beneficial for businesses who work on multiple apps at the same time.

Simple Routing – Unlike ESBs (Enterprise Service Buses) that work by using systems for message routing, choreography, and applying business rules, microservices work like classical UNIX systems, where they receive requests, process them and then reply accordingly. It has smart endpoints that process info and apply logic, and dumb pipes through which the info flows.

Decentralized – Microservices don’t require a centralized governance and instead opt for a decentralized one since developers work exceptionally hard to build useful tools that even others developers can use to solve similar problems. Additionally, they also prefer decentralized data management since each service usually manages its own unique database.

Failure Resistant – Microservices have been designed to deal with failure. In a monolithic design, if one module fails it can affect the entire app or software. However, in microservices if one module fails, it only affects the services on that particular module, and the developer can also design for other neighboring services to take over for that module.

Scaling – Microservices are not designed for smaller companies that work on a single app or software, but instead big companies that are constantly scaling their apps and products to include more requests. These types of architecture are ideal for companies that can’t fully anticipate the types of devices that may one day be accessing the application. Companies can also originally start off with a monolithic architecture and then upgrade to microservices.

Microservices in the Future

Microservices are definitely the blueprint for development in the future. While they might face some competition from cloud services, each one comes with its many different benefits. However, microservices are definitely on the road to replace the old monolithic designs. They allow developers and companies to easily compartmentalize their software, having different teams dedicated to different sections, and ensure that each section works as it is supposed to. They also allow them to modify and tweak the codes without having to reload and deploy the entire app, as well as easily manage their apps in case something does go wrong.

As software becomes more difficult and we become more connected to the world, microservices are the best way to deal with building, managing and deploying these types of apps.

Here is a quick list of benefits for using microservices:

Looking at all the latest trends, we definitely expect microservices to become a huge deal in the coming future.

Learning the Basics of JavaScript Functions