I would usually avoid these type of posts, I really don’t see the value in them and most of the time, fifty other people are already trying to ‘rank’ for the same keyword all over the place, just to earn some buck.

I’m not saying I wouldn’t like to earn a buck, but this theme captured more than just my money side of brains – I rarely see this high quality WordPress themes coming out of ThemeForest, and I just felt like I need to document it a little bit.

I consider myself a minimal person, I like to keep it nice and short, and the more obvious it’s for you to realize that there is content to read – the better I feel about the overall quality of my site. It has worked wonders for me in the past, and still does. 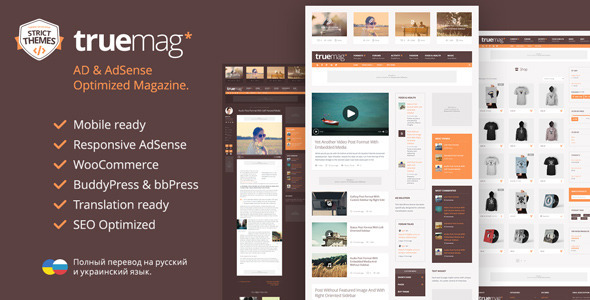 You should know that, almost, any WordPress theme can be considered an ‘AdSense theme’, it just takes a little bit of work and thinking on your side to get it done. But, I see it as no problem, even Google itself is now offering an official WordPress plugin for publishers to use and monetize their blogs with.

Truemag is not an AdSense theme, it’s a theme that is so minimal – that the ads themselves make the appearance, more than a theme bloated with ten different colors would.

Yeah, it might be difficult to launch a successful content site with this theme, but I think that it’s perfect for sites who’re just starting out, and want to make their appearance felt trough design.

The theme on this site was also bought on ThemeForest, but over time, I’ve made dozens of improvements and changes, and it doesn’t feel like a stock theme anymore, it feels unique – and I know that it’s all thanks to my own innovating and minimal thinking.

You get really nice content pages that have both social aspects taken care of, and also readability aspects taken care of. You might think there are a lot of banners on the site, but they’re quite invisible to the trained eye, and if anything – only going to capture the attention of those who’re clicking ads anyway. At least, that’s how I see it.

I’m going to leave this here for my own memory, perhaps I’m going to use this in the near future on a new site that I might launch. I also hope that it will inspire you to take a closer look at Truemag, and all that it has to offer. I only wish that ThemeForest had more of this same quality themes coming out – it looks like the majority of designers there have forgotten about the roots of good design.

The 5 Best Design Pattern Books for All Level Programmers